Fluffy pancake batter and slices of succulent Autumn fruits - how can you lose?!

This was easy enough to whip up in the morning , and you can mix slices of apple and pear for a bit of a surprise. The cinnamon spice really compliments the fruit, but that goes without saying! 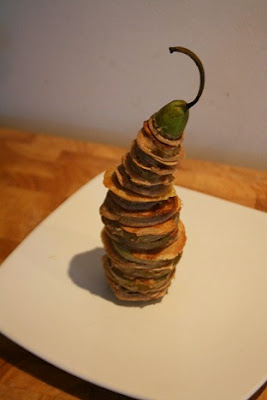 The top fell off a couple of times as I was taking the photos, go figure... I think it looks a little bit like a kiwi-bird...

- Make the pancake batter and set aside for 5-10 minutes.

- Slice the pear into rings, and heat the butter or oil into a frying pan on medium-high heat.

- Dip the slices into the pancake batter and fry for a couple of minutes on each side until golden.

- Stack them high, and douse your favourite syrup or butter over the top and tuck in!

And on the note of sweets, today my friend Rhea and I went on a little cafê crawl, OK...we only went to two but it was so nice to get to catch up, I hadn't seen her in months!

We came across this tiny little almost Disney-like place where there were three tables, old china plates and saucers hanging on the wall, along with printed fabric bags and cloths, and handmade art for sale. It was great, and as the gingerbread they were selling had come straight out from the oven and had juuuust had the icing drizzled over it, we couldn't help but share a piece. Along with the cake, I had a Mulled Wine latte and Rhea had a deluxe minty hot chocolate..... 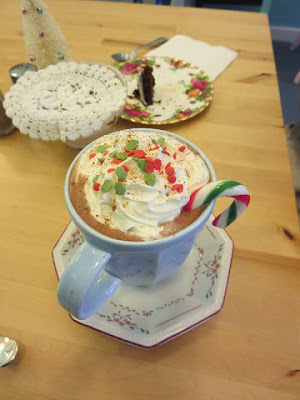 Just looks at it! Guess christmas came early ^ ^ What is your absolute sweet Winter comforter? It can be a drink or a cake, or anything else! Perhaps there's a place you visit as a tradition around this time of year?

- Jules
Posted by JulesTheNorweegie at 20:11