I have reached TWO HUNDRED posts in less than a year! It was on the 26th July last year that I decided to delete the few posts that I had on my blog and start over again, this time focusing on cooking.
Over the last 12 months, I've made so many dishes and used so many combinations of ingredients that I would never even have dreamt of! It is only the last couple of years that I have discovered cooking, but I am so happy that I did! Thank you so much for dropping by, I hope you have found some inspiration on this humble blog of mine.

And now, for another modest little number, a berry crumble! It was the first time I have ever made crumble before, but I know for certain it definitely wont be the last one. Next time, I just have to remember to make bigger portions! Instead of the "sukrin gold" you can use any sweetner (preferably natural for your own sake!) or sugar, just remember that that'll change the nutritional information slightly!

These little crumbles were delicious without being too sweet, just the way I like it! Next time I might use agave instead of the sukrin gold though, just to see how it turns out with an ingredient that is slightly easier to get hold of! 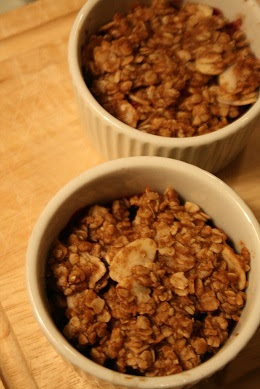 - In another bowl, mix the remaining flour, almonds, porridge oats, cinnamon and 1 tbsp sukrin gold. Stir well before tipping in the oil and a splash of water.

- Top each bowl or ramekin with a thin layer of the crumble mixture, and bake in the oven for about 20 minutes until nice, golden and crisp!

You can serve this as it is, or with a bit or icecream or yogurt on the side!

On another note, the weather in Glasgow has almost been impeccable for over a week now, finally Summer decided to arrive *smiles*
Earlier today, I enjoyed a lovely barbecue dinner. But it was so simple that I didn't think it would be any point in posting it. Usually barbecues are all about improvising anyhow, right?

Have you been celebrating the season in style so far this weekend?

- Jules
Posted by JulesTheNorweegie at 23:18 2 comments:

And what better than to make this deliciously creamy dish? I found it on a website where they follow a certain diet called Grete Roede, BUT I don't believe in such things, everything in moderation. I believe in quiche!
Originally there were five types of onion in here, a few of which I don't know the names of, so I stuck to the four classics! 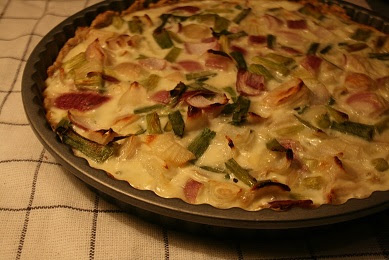 - Mix together all the ingredients for the dough in a medium bowl, and then roll out and place in a pie dish. Prick holes in the base several times, using a fork. Place it in the oven and bake for about 10 minutes until just cooked.

- In the meantime, heat up a large sprayed non-stick frying pan and soften the onions. Take out the base when it's done and let it cool slightly as you're working on the filling. After about ten minutes, turn the heat for the frying pan down to low, and add the eggs, milk and cheese. Stir for a few minutes until the cheese has just started to melt.

- Transfer the filling into the quiche base, and bake in the oven for about 30-45 minutes until cooked and slightly golden on top.

Serve it as it is, or with a small salad. I had some mixed baby leaves along with a bit of protein, delicious! 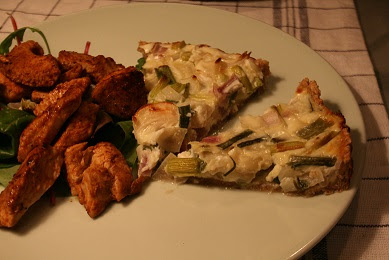 
- Jules
Posted by JulesTheNorweegie at 07:27 No comments:

Not quite sure what to do with that last piece of lonely cabbage in the fridge, and that leftover parmesan? Look no further! Here's a recipe for a gratin packed full of vitamins, and it's filling too! It has quite an Italian taste to it I thought!

Gratin of White Cabbage & Lentils
(Serves 2, about 360 calories each) 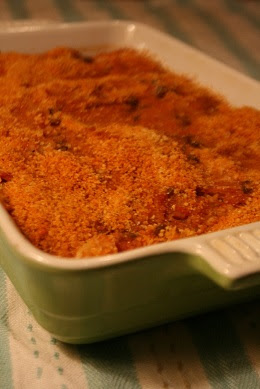 - Start by boiling the lentils in some lightly salted water for about 20minutes, until tender.

- In the meantime, in a medium sized frying pan, have the oil and soften the onion and garlic for a few minutes, before adding coriander and thyme. Stir for a further couple of minutes before mixing in the tomato purée, chopped tomatoes, sugar and seasoning. Let it bubble away until it has thickened.

- Drain the lentils and set aside, then boil the cabbage for 3-4 minites until slightly tender. Pour off the water and mix the cabbage with the tomato mixture and lentils. Tip into a small oven proof dish. Mix together the ingredients for the topping, sprinkle over and bake the gratin for 20-30minutes until golden and crisp.

- Serve with some good bread, as a side, or whatever you wish! I munched it on its own, and it made for a nice lunch!

- Jules
Posted by JulesTheNorweegie at 06:58 No comments:

Here's a little side salad that I found the recipe for the other day. The original recipe uses black rice, which makes it look a lot classier and the fruit stood out better. I thought I would make do with my wild rice instead as I already had it. And instead of peanuts, I used cashews. It turned out really nice, and I had some today along with a leftover vegan burger that I made yesterday!
Double the recipe for a more even batch, so you're not left with half a mango and orange...or just have the fruit as a light dessert afterwards! 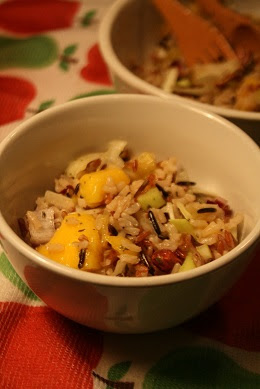 - Start by boiling up water, bring it to a simmer and let the rice cook in some lightly salted water for about 20-25 minutes until tender.

- In the meantime, prepare the rest of the salad. Start by peeling the orange and remove the white pith. Over the bowl which you will make the dressing in, cut out the orange segments, making sure that the excess juice runs into the dressing bowl. Have the orange in a salad bowl.

- Add the lime juice, fish sauce and olive oil to the orange juice, whisk and set aside.
Prepare the remaining ingredients and have it in the bowl along with the orange fruit.

- Once the rice is cooked. Drain and let it sit covered for about 15 minutes. Then, take off the lid and cool before pouring over the dressing, stir well before adding the rice to the salad.

Serve alongside a main meal, and enjoy!


- Jules
Posted by JulesTheNorweegie at 17:57 2 comments:

Today, I was meant to have a vegetarian Friday alas I#m already about ten king prawns over that quote *sigh* BUT I decided to stay true to making a vegetarian dinner, vegan even!
I have tried to make vegetarian burgers before, but these ones turned out the best out of them all so far! 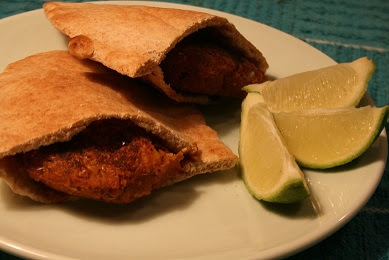 The pita breads were just a liiiittle bit too small for the burgers, so I cut them in half, and voila! Very tasty along with some salsa and a squeeze of lime juice

- Start by chucking the soy granules, spices and soy sauce in a blender. Boil up about 200ml water and pour over it, sover and let it sit for about ten minutes, so the granules get a chance to soften.

- Chop the onions and soften in a frying pan for about five minutes. Then add to the soy mixture, along with all the rest of the ingredients except the oil.

- Heat a frying pan on medium low heat, and shape the mixture into 5-6 patties. Fry each in a little oil for a few minutes on each side until golden and slightly crisp. 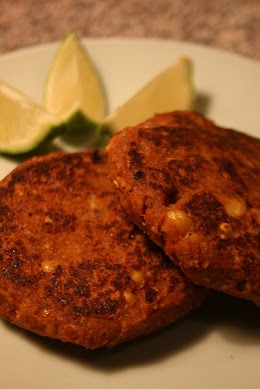 And done! Serve with salsa, guacamole, pita breads, flatbread of whatever you want and enjoy!

- Jules
Posted by JulesTheNorweegie at 19:01 2 comments:

So I might have made moussaka before, but here is one that is vegetarian!

Technically, you can make any version without meat, just go for delicious quorn mince instead. I discovered I am not a big aubergine fan, although I like it in stews, so next time, I will swap the aubergine for some thinly sliced potatoes instead. I hope that wont be frowned upon! 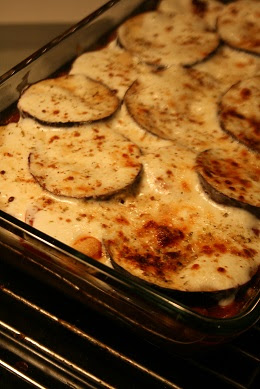 - Heat a large pot and gently soften the peppers for a few minutes. Then add garlic and cook for a further minute before tipping in mince, lentils, half the oregano, passata and a splash of water. Bring to a boil and simmer for about 30-40 minutes until the lentils are tender, stirring occasionally.

- In the meantime, turn the grill to medium, and have the aurbergine and tomato slices on a baking tray. Spray a few times with oil, season with the remaining oregano, some salt and pepper, then place under the grill for about 5 minutes, until lightly charred.

- Mix half the cheese with the Greek yogurt. Pour the mince mixture into one medium oven proof dish, or four separate ones. Top with aubergine and then spread over the yogurt evenly. Sprinkle with the remaining parmesan, some oregano and nutmeg and grill on medium for 5-10 minutes until the moussaka starts to bubble and goes slightly golden on top. 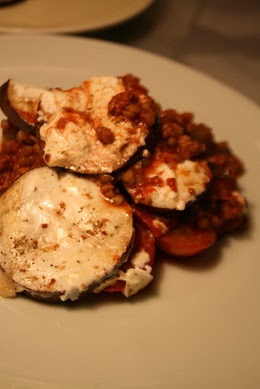 Serve with some good bread for mopping!

- Jules
Posted by JulesTheNorweegie at 22:35 No comments: