The Grass is Always Greener...

Almost four years ago, as soon as I finished school, or Upper Secondary as they call it in Norway, I decided to move - to Scotland.
For years, different elements had seemed to drag me towards this island country, and when I told my parents I was going - they weren't surprised. In fact, they said "Off you go, you have been talking about it constantly for years!" and off I went.

I remember the first time I visited Scotland on my own. Having promised myself not to visit Glasgow due to the reputation the city has, guess where I ended up? Aye, Glasgow. After having seen Aberdeen, Inverness and Edinburgh, I finally got to the city I was so afraid to visit.

But where were all these neds, and the homeless "junkies" I had heard so much about? It also turned out that the Stab-Inn hotel was actually just fiction, for a minute, I had actually believed in my Uncle when he said that such a place existed.
The city was vibrant, but in that British sort of way, draped in shades of grey. As for the people, they were all really warm and welcoming. Another thing that had caught my attention about Scotland, was the music scene. Once I came here, I realised that what I had learnt about the music from this charming country, was just a fraction of what was actually out there.
Going out on a random evening with no plans, can perhaps be one of the best things to do, as you'll always come across a free gig, or a nice little place to take shelter from on those rainy days (of which there are many of here, almost as many as in my hometown Bergen, if not more) where you will be greeted by delicious pub food, or perhaps a nice bowl of homemade dhal from a nearby teahouse.

Ever since I decided to migrate out of my comfort zone, and into what seemed could be the place meant for me, people always asked me, and still do to this date:

"It can't have been easy moving so far away from your home, was it not difficult?"

The first couple of years, my answer was simple: "T's the easiest thing I have ever done!" Having talked about it for so long, dreaming and longing for it, it seemed natural - it had been the right thing to do.
As the years go by though, you get used to your surroundings, and that accent that I had been so intrigued by at first, has become an every day occurance. Things that seemed unfamiliar and exciting, change, and becomes your comfort zone, much like in the place you once used to live. 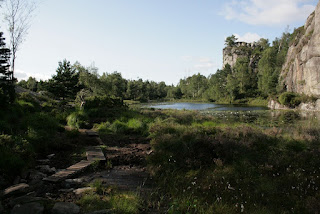 In the later days, I have been thinking a lot about Norway. I go back and visit twice a year, but sometimes - that doesn't seem enough. On days when there is a Norwegian holiday and I am stuck in the office in little ol' Glasgow, I do think to myself: "I would have had today off! ARGH!", but it is the other way around here, and I get my Scottish holidays when they don't. Then again, I was never old enough to experience the proper full-time working life back home, and so I am left with the memories of every school holiday imaginable, and it all seems a little too good to be true now.
It is on these holidays though, I seem to miss my family the most, and it can be difficult at times... It is whenever these feelings of uneasiness occur, that I have to think about the fact that people live their separate lives, and although they have all the time in the world on their holidays whenever I come over in the Summer and for Christmas, it isn't always like that. Family and friends study and work, and if I was to live there, it would be much the same as over here - except the scale of live music and places to go out for something to eat would be slightly smaller. 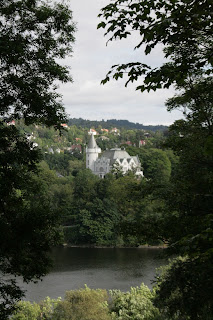 And so it is I return to where I begun at this circle of thought, and think to myself: Glasgow's quite all right actually. I also get tired of talking Norwegian over a long period of time, which I have always found a bit odd. In addition to this, there no way in hell I would have found myself on stage on an open-mic night in Norway, like I have over here, I was way too shy whenever I lived there. Scotland has taught me how to be a little less afraid and certainly less shy! Well...actually....Yes, a little bit at least *smiles*

Anyhow, if you have experienced moving aborad and how that affected you, both in good and bad ways, feel free to share it here. Home is where your heart is, or so someone say anyway!

You might find the occasional post here about Norwegian and Scottish culture, seen through my eyes, as well as posts about life and some of my thoughts around this epic (to quote the ever-so-clever Pippin) mission....quest...thing that we are all on. 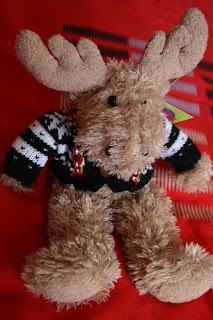 -Julie
Posted by JulesTheNorweegie at 18:57 2 comments:

Hello, and thank you very much for stopping by.

I created this blog in 2009 with the intention of updating it regularly, writing about bits and pieces of my life that I thought would perhaps be worth looking back at in the future. Three years later and here I am....Reading through my impressive contribution of three posts. I did read through it, and it put a smile on my face - yet somehow I decided to start again with blank pages.

Over the last couple of years I have taken to cooking, and after having discovered there are a lot of people who blog about food, adding recipes by themselves and others, I thought perhaps it would make me more creative and actually better at writing posts from time to time if I did the same.

I am a girl who up until today, had not had any accidents in the kitchen. A few hours ago, I decided to rattle up some nice homely food that remind me of Norway, where I was born and raised, until I decided to pack my bags and move to Scotland at the age of almost 19.
The cooking itself was going great up until I thought: "Hey, smells like someone is having a barbeque!" (It being Glasgow - Scotland, and for once having the sun paying us a visit, I thought that a barbeque was definitely not impossible) It turned out one of the choppingboards were leaning up against the wall, standing on...the stove, and what I thought had been sizzling Summer cuisine was, in fact, melting plastic. Moments later, all the windows were opened wide, and luckily now, the horrible smoke is all gone. 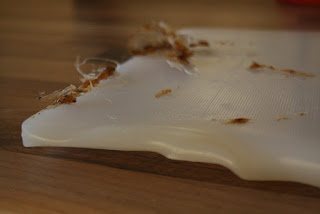 
Welcome to my blog. I am sure that the mentioning of me writing about cooking, followed by a story of how I failed to do just that (...wihout any complications anyway - as the food turned out to be quite tasty) has drawn you slightly closer to see what will come next, or even just to see if the second chopping board will last long enough to see another season through. 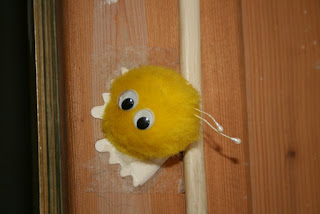 Posted by JulesTheNorweegie at 20:59 2 comments: