Candy turtles.. candy..wait, sweet turtles, as a... snack? What? How does this work?

This was pretty much my reaction the first time I saw someone writing up the recipe for these amazing little treats! The first time I made them, I did it with the Rolo chocolate, the "proper" way one might say, but then... THEN, I decided to make some healthified turtles, they tastes just as good as the original, but the "chocolate" is darker - which, in my humble opinion, is a good thing! My flatmate quality checked it as well, and couldn't believe they were healthy!

And the best thing? They're whipped up in minutes, and it hardly takes any longer to double, or treble the recipe, if anything, it might make it easier with a bigger batch of dates to make the chocolate paste - score! These disappeared pretty much the instant they were served up, mainly thanks to me...oops! 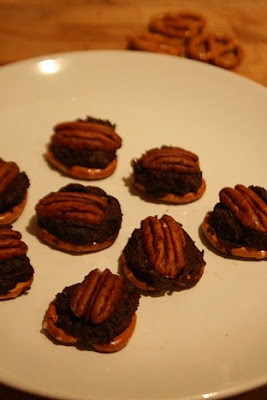 - Start by having the cocoa, dates and water in a bowl, or a processor (you might need to make a bigger batch for it to work in a food processor). Whizz until combined, scraping out the stick blender from time to time to make sure it all gets mixed up.

- Once the chocolate paste is done, you're ready to roll! Plate up pretzels, and take some of the date-chocolate and roll into hazelnut shaped balls, place one on top of each pretzel. Once you've run out of chocolate paste, top each of the chocolate pretzels with a pecan and gently press down. You can make them look a little prettier, using your fingers to smoothen out the edges.

What are you waiting for? Serve these badboys up... Perfect with a cup of coffee or a glass of milk, yum! 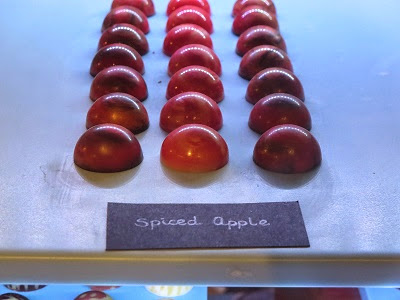 I finally got around to uploading some new photos on my little digital camera, and so I can show you my first creation in the chocolate factory! Spiced apple. Originally, I had toffee apple in mind, then when I tasted it - I thought about apple crumble, but the others thought the cinnamon was a little too powerful for it to be called that, so it ended up being Spiced Apple. It has a light crunch when you bite into it, pretty all right for a first I thought!


And I will finish off posting a picture of little Morrow, a lurcher who was waiting for his owner (who when turned up, told me that the dog's name was Morrow ^ ^). 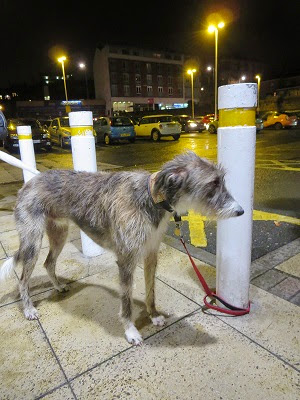 Such a beautiful scruffy thing, with one brown eye and the other icy blue! I keep telling myself - when I win the lottery....Then I'll finally get a dog. One day! For now, my loyal little goldfish - Seamus and Finnegan will be there by my sice, I cannot believe they're five and a half years!

Do you have any pets?


Recipe by yours truly,

- Jules
Posted by JulesTheNorweegie at 09:44