Ho-ho-holey moley holidays are right around the corner, I only have two days left of work before taking a little break, I cannot wait! But before that, let me show you my new addiction....


My dearest Ragnhild tipped me on this little dish when I posted my recipe for Sunshine baked potato a few weeks ago. I had to try it out and boy - it was mind blowing!

It is vegan, it features sweet potato and cinnamon - how can you possibly go wrong?! You can't, thankfully!

I renamed this dish, as I only had it as a light snack, for a main meal though, use a whole sweet potato, trust me - you are going to want all of it!

Dirty Tiger Paws
(Serves 2 as a snack with four tigerpaws, or 1 as a main using a whole sweet potato) 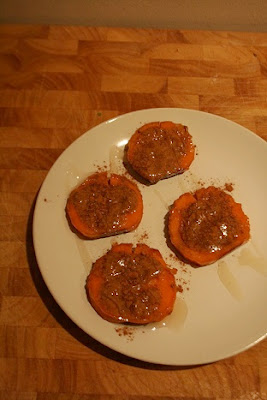 - Start by boiling up water for the sweet potato, peel it and boil it for about 10 minutes.

- Once your sweetpotato is boiled to al dente, pop it in the oven for about 25 minutes, then, turn the oven down to 180ºC and bake for an additional 15 minutes until soft.

- Depending on whether you're having it as a snack or a main, slice it up and plate up/ Dip a teaspoon into the almon butter and spread it on top of a slice, repeat until all the slices are covered, then drizzle with agave syrup (about 1-2 tbsp) and then sprinkle a little cinnamon on top. 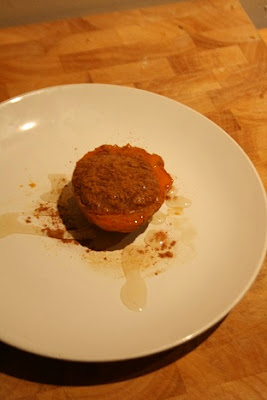 
I might have already had this three times since I discovered it... And as for the almond butter? Long since gone, will top up super soon!


- Jules
Posted by JulesTheNorweegie at 09:19